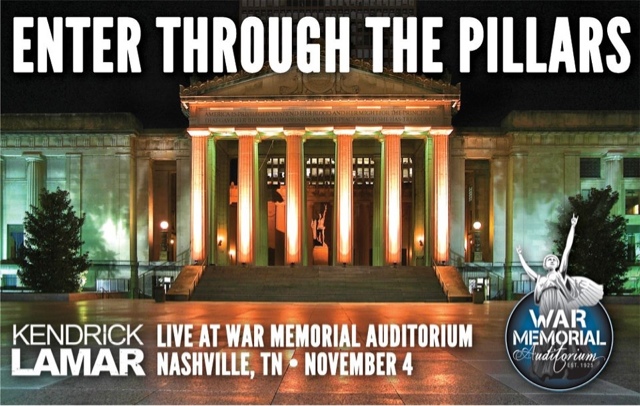 Let’s give Lovenoise a gold star for their consistent delivery of hot music to Nashville. I mean really, do these guys stop searching for the popular folks and bringing them to Nashville?

So, when I saw that the newest prince of West Coast rap, Kendrick Lamar,  was making his way to Nashville on November 4th, I had to give the LoveNoise crew a standing ovation. Then, he’s gonna perform at the War Memorial Auditorium? Really! Trump card all day! that’s an awesome venue and concert goers will feel quite swanky with this eclectic hip-hop set-up. 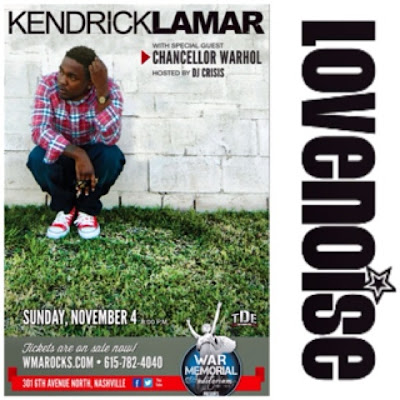 Kendrick Lamar currently holds the #1 position on every chart with his new album, good kid, m.A.A.d city. The eclectic urban storyteller is originally from Compton, won the blessings and production of Dr. Dre, and is a favorite by rappers across all lines. His summer hit, Swimming Pools (Drank), got major play this summer which gave listeners an awesome set up for his, currently critically acclaimed new project. Seriously guys, he’s like the new Prince of Rap – you might want to buy a ticket to this show before Kendrick gets to ‘Lil Wayne’ status and his tickets are in the 100’s of dollars.

Oh yeah, opening for the young prince is another, on-the-rise, catch him before he blows ALL THE WAY UP, genre bending eletro-rapper, Chancellor Warhol. He’s fresh from playing all the cool music festivals (including SXSW and Bonnaroo) and has lots of new music to share. Clearly, this is gonna be a great show!