Skip to content
We are rolling through this fashion week re-cap. My hope is that you enjoy my review and you get an essence of the past week. No matter how many reviews you read, understand that the event was a huge undertaking and a success. The fashion scene in Nashville has recieved a great boost as well as the businesses who participated.

Let’s get on to Day 3 of Nashville Fashion Week. This was the big day – this was the day Christian Siriano would show his collection. Nashville would be privy to see a collection that only the most coveted fashionistas have had a chance view. That being said, it seemed that more than 500 people lined up around the Crystal Fountain church in East Nashville. I was happy to have my media pass, as I wisked my way past the fans and waited to enter the building.

The lines moved smoothly and we were placed into an older church. Through the week many questioned if the church would be a good venue for a fashion show. This is a venue where no alcohol would be served, guests were asked to sit in pews, and calligraphy bible verses decorated the walls. However, thanks to Nashville Big Events, the lighting helped transport us to a new dimension in fashion. Once again, my media pass allowed me to have a great view of the show. Other guests weren’t so lucky. An elevated platform runway would have served best to help everyone see the models. 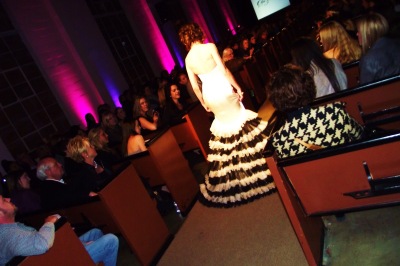 The first designer of the night was bridal designer Olia Zavozina. This Nashville based designer specializes in custom wedding gowns and evening wear. She also designs menswear. As you can see in the picture above, Zavozina gave us a fantasy of wedding dresses. She relied heavily on lace, ruffles, and a mermaid silhouette. There were several pieces in the collection that became fast favorites. 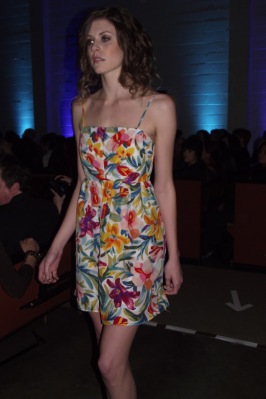 Cooper by Courtney Warren was presented by Posh Boutique. I can see why the boutique carries this line, it’s cute, feminine, and totally wearable. Warren presented flirty dresses, rompers, skirts, and shirts. Watching the models I was reminded of my summers in Cape Cod, where effortlessly stylish young ladies spend summer days eating lunch near the beach and riding bicycles through town.

The red dress and red stockings shown above were my favorite ensemble of the night. This design belongs to White Rabbit by Shea Steele. Shea is the owner of Local Honey boutique in Nashville. Her who line was wonderful. I loved that accessories worn by the models to help create the looks. Models wore opaque tights, berets, long necklaces with red flower ornaments hanging. The crowd reaction was great as we warmed up for Christian Siriano.

Before the grand finale, we viewed Union of Angels presented by Stacey Rhodes. This line was SO Nashville! Let me re-phrase that, this line was so the way people think everyone in Nashville dresses. There were modified cowboy boots, riding pants, and lots of leather bomber jackets. However, a high-waisted pencil skirt caught my attention as well as black dress with draping detail on one arm. 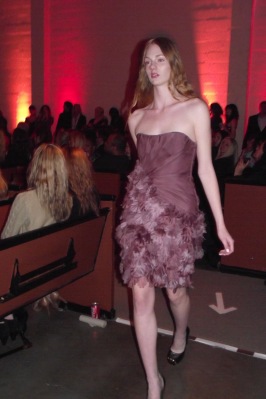 Last, but certainly not least was Christian Siriano. The lights dropped dramatically as we were ushered to fashion heaven. Siriano’s used blush pink, olive green, and lots of black. There was draping, flowers, ruffles, billows, and sheer fabrics. 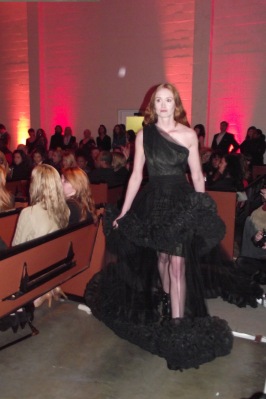 During NYFW 2011, I watched Siriano’s runway show live online. I was not impressed. However, being up close (and personal) to the designs I had to appreciate the craftsmanship. Each dress has a unique appeal.

One can see that Siriano puts extreme thought and effort into his looks to create not only a dress but a dream for his clients. In addition, models wore Siriano’s sky-high shoes. Surprisingly, no one fell.
Take a look at the video below, Day 3!

This is the face of a person who just turned on her ‘OUT OF OFFICE’ notification. Listen, I haven’t been on vacation in 3 years! Yes, I’ve been out of town, but I’ve been on the clock or I’ve been helping a relative. But this time I’m just going to have FUN!
Every BODY deserves to feel wanted and feel sexy. That’s why I was excited to partner with the ladies of @plusstylenash to present the VELVET RAINBOW lingerie collection from @heymavensxo!
Yes! It’s my birthday! #June14, best day ever! I was wondering why I’ve been pushing myself to make this year’s birthday special. It’s not a ‘milestone’ birthday but it is an achievement … I MADE IT THROUGH A PANDEMIC! And you did too. So if there’s a reason to celebrate, GO AHEAD AND DO IT BIG in 2021!
GUESS WHAT … TOMORROW IS MY BIRTHDAY! ✨ Cashapp shortie $fabglance 🧁🎈🎂 #June14
This time next week, I’ll be in LA so talk to me nice!
Rain, rain, Go Away! Nashville’s been super rainy these days but thanks to my @verabradley Performance Twill Backpack and sleek compact umbrella, I’ve been able to arrive dry and in style [AD].
WOULD YOU RATHER: Never be able to make eye-contact or always have uncomfortable eye-contact with everyone you meet?
Someone just asked me how the 45 Day Fitness Challenge is going? See what had happened was … LIFE! Here’s the deal, my life got UBER stressful right on Day 15. But, I’ve still stayed on task with eating well, getting rest, and drinking water.
We are one week away from my birthday … what y’all getting me?
Funny thing happened during the pandemic: I gained some weight AND I gained a bunch of confidence. 😯 Something about thinking the world may end … and today is the only day we’re promised … made me realize I need to do me more often!