Today, we take our eyes off of celebrity style, fashion, and trends, to talk about an issue that is effecting our nation. More than a week ago, George Zimmerman was found ‘not guilty’ of the shooting death of Florida teen Trayvon Martin.

The nation was polarized with many African-americans feeling the pain of losing a teen to an act of violence that didn’t have to happen. The verdict came to me via a CNN notification on my phone. Upon reading, ‘Not Guilty’, my heart sank to the pit of my stomach. I could only imagine the pain Trayvon’s parents were feeling at that moment. Immediately, I wanted to know what I could do. This issue wasn’t JUST about racism, it was about the safety of children, gun protection, and the loopholes of our legal system. 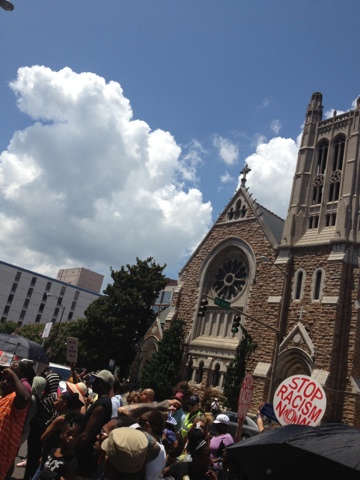 On Saturday, July 20, 100’s of community members, clergy, and citizens of Nashville  came together on behalf of Trayvon Martin’s legacy. This rally was in conjunction with more than 100 other rally’s happening across the nation including: New York, Chicago, Miami, and Los Angeles. In Nashville, Vanderbilt student Magaela Bethune teamed up with John Smith Marketing to answer the call for a rally in our city:

“I did not see one being planned, so I literally made a Facebook group to save the date,” Bethune explained. “When I found out there was nobody that was going to answer the call for Nashville, I decided to pull community organizers together to host the vigil.” (source)

The weather was a sweltering 98 degress, but people arrived at the Estes Kefauver Federal Building & Courthouse in downtown Nashville. The Nashville Police Department did an amazing job of helping rally attendees stay safe in the heat while directing busy downtown traffic. The police blocked off one lane of Broadway during a usually busy Saturday afternoon. Even tourists, coming to see the sights of Music City, stopped by the rally listening to ministers and community leaders speak about justice, racial equality, and gun control rights.

Saturday’s rally served as a catalyst, a jumping point, for the Nashville community to be involved in the various aspects of injustice concerning the Zimmerman case. Some may choose to disconnect themselves from the shooting, however in a moments notice this could be your teen – and that’s the real reason for rallies, forums, and national discussions.

The National Action Network is the place to find more info on upcoming rallies and forums in your area. Of course, Fab Glance will keep you posted with notifications via our Facebook Page.