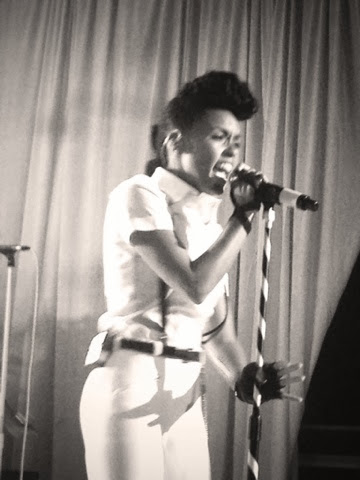 I’ll start this review by saying, I liked Janelle Monae, but I never considered myself a ‘fan’. She had a couple songs I listened to, here & there, but ya know . . . . So why did I buy a ticket to concert for an artist I wasn’t a fan of? Because I wanted to say, “I attended a Janelle Monae concert.” I had to see what the BIG DEAL was all about.

You have to admit, for the past two years, you’ve watched this pompadour princess get more popular. She was popping up on magazines and has even garnered a Covergirl Cosmetics endorsement. Everyone talks about her tuxedo style, often wearing black & white, but little understand why. I wrote a piece on Monae’s style for Natural in Nashville:

Monae, a consummate grown-up readily involved in her own artistic development stood her ground. From that point, around 2006, Monae was rarely seen without her uniform – some variation of a tuxedo, black & white saddle shoes, and her natural curls assembled in a pompadour. Of her tuxedo-ed look she states: “I bathe in it, I swim in it, and I could be buried in it. A tux is such a standard uniform, it’s so classy and it’s a lifestyle I enjoy. The tux keeps me balanced. I look at myself as a canvas. I don’t want to cloud myself with too many colors or I’ll go crazy. . . . (source)” 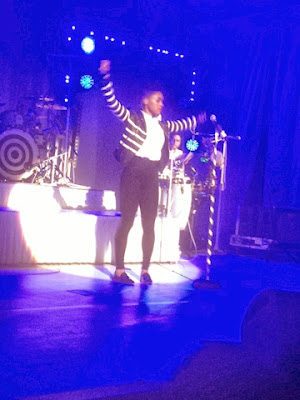 The crowd was ready for Janelle. These were FANS and they did as was expected. Fans were rocking signature black & white outfits, pompadour hair styles, and signs – it was all love. The stage was draped in all white, with various black details: a striped microphone stand, a dizzying striped drum kit, and black/white outlined platforms. They were ready to hear form their leader The Electric Lady aka Cindi Mayweather aka Janelle Monae.

If you are familiar with Janelle you already know her albums follow the story of Cindi Mayweather, an android who falls in love with a human. Falling in love with a human is forbidden in Mayweather’s world, so she’s on the verge of being disassembled.  Janelle’s newest album, The Electric Lady, is about Cindi before she falls in love. That’s why Janelle (who says she shares the same DNA as Mayweather) debuted the video for “Primetime (ft Miguel)” – it shows us the loving side of Cindi. 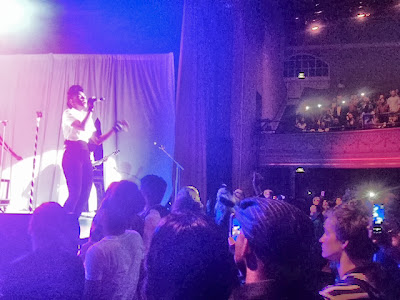 The Electric Lady philosophy gives women (and men) reason to feel liberty in pursuing the dreams.  The dreams that your soul screams about while one lays in the bed in the middle of the night. Be independent, be full of light and energy, go big or go home, be afraid, but go forward and don’t forget to have fun while you dance you life away. As an artist Janelle encompasses everything you hear in her songs. As a performer, oh gosh, it’s so much more!
Standing only five feet tall, 27 year old Janelle is a BALL of energy. During her performance at the Ryman Auditorium, Janelle sung for two full hours, taking two breaks to change clothes (black and white ensembles, OF COURSE). Accompanied by a full band and two background singers, Janelle performed songs from all three of her albums but she concentrated on tracks from The Electric Lady project.  She even added two covers: “Who’s Loving You” by The Jackson 5 and “Let’s Go Crazy” by Prince. 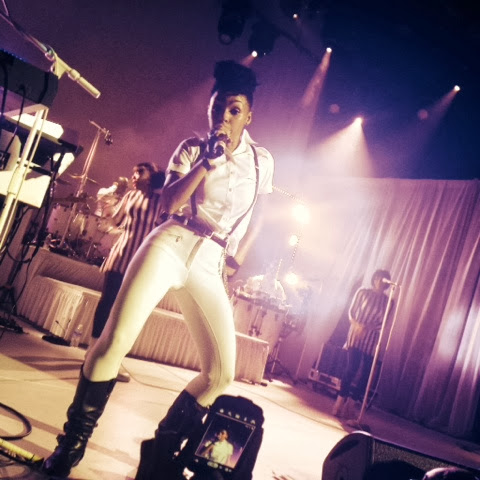 I could go all day talking about how gorgeous Janelle is. Her face is flawless, her teeth are starkly white and straight,  her petite frame is part pixie, part glitter and all grown-up. Despite her small frame, she’s an adult who seems fully aware of her presence, celebrity, and talent. I’m sure everyone in the audience felt like Janelle was singing to them (and only them). She has a knack of making people feel special even from 50ft away.
She’s a total performer, often showing her formal dance training in fleeting glimpses – a quick pirouette followed by a jumping flourish off of the stage. And yes, she did jump off the stage, she ran the aisles like a track star, and walked on the top of the pews at the Ryman. Fans were astonished!
But the VOICE – oh the VOICE! Janelle can SING! At one point, she started singing “Walk With Me, Lord” away from the mic, in full voice. I saw a grown man shed a tear. She took us on an impromptu voyage back to the past – when singing in church is where most soul artists find their footing. It wasn’t a coincidence that the Ryman IS an old church and Janelle said she felt the spirit in that place. 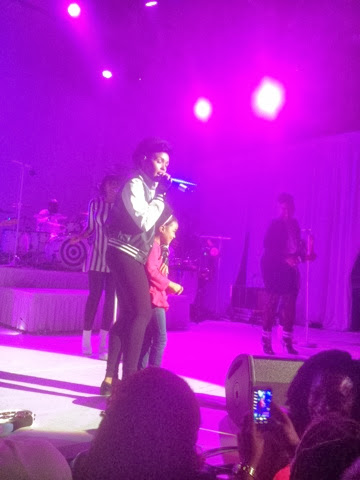 After thanking Nashville for showing up, and showing out, Janelle ended the concert by singing “What an Experience” from her current project and, it was an experience. The words I’ve typed still can’t encompass how I felt after leaving the concert – the effort she puts into her performance makes you feel better that you bought a ticket.  Her voice, beauty, and performance are BEYOND. My mind and body were buzzing from being in the presence of such excellence. I went from a part-time fan to a full-time devotee.
FIND OUT WHEN JANELLE MONAE WILL BE IN YOUR TOWN
www.jmonae.com