If you know me, or follow me on the social media, you know I LOVE the city. Being from New York, I’m used to the hustle & bustle of the big city. One of my life goals is to visit every major city in the United States. That’s why I was excited to spend 24 hours in Chicago! With only 24 hours in the city, I had to fit EVERYTHING in my visit. Everything meant . . . I had to see the number one attraction, that giant silver bean and I had to eat some deep dish pizza. Call me basic, but it’s what I wanted!

Thanks to my Day Job, I was blessed with the opportunity to visit Chicago. Our corporate headquarters are in Oakwood; we had a corporate training. I decided to head to Chicago a day early to take in the sight and sounds of this amazing city! Off the top I can say: I’ll visit again, the food is AMAZING, and the transit system is ultra easy to navigate.

I stepped off the plan in Chicago’s Midway Airport. It’s not the fanciest airport, but it’s not the busiest. Most travelers can get to the city fairly quickly from Midway. I caught a Lyft from the airport and arrived to my hotel within 20 minutes. I checked into my hotel, caught a quick nap, and headed downtown.

Everyone told me that the Chicago transit system was easy to navigate. I’d have to say that I agree. Using your smartphone map, and the transit system map, you can get to almost anywhere in Chicago. The train ride was almost delightful. The cabins were clean, the instructions were easy, and the prices were affordable.

I knew where I wanted to go. I was headed down to Millennium Park to see the Cloudgate, also known as The Bean! And boy I was not disappointed! Millennium Park is an amazing destination for visitors to Chicago. The massive silver bean is just one of many art installations in the park. There are also gorgeous fountains, botanical gardens, and a beautiful amphitheater. Visiting The Cloudgate is a totally interactive experience. You can touch it, take tons of photos, and there is plenty of space to sit & think.

There’s no bad side to the bean, so taking pictures is an ease. I arrived on a Sunday afternoon around 3:30pm. There was a nice size crowd at the park, but not too much to be overwhelming. The sculpture is literally breathtaking and you MUST go see it.

Millennium Park is massive, easily a five mile walk from top to bottom. The park connects to a waterfront view of Lake Michigan by having guests walk on the BP Bridge created by artist, Frank Gehry. At first, I didn’t want to take the presumably long walk, but the bridge is so amazing, you can’t stop yourself. As I exited the bridge I turned around to see the most perfect skyline. At that point, I knew I was in love with this city and I’d be back sooner than later.

As I stated before, Millenium Park is super huge and connects to a wonderful riverfront park. Like, the maps tell you that the Great Lakes are huge, BUT dude, Lake Michigan is MASSIVE! I saw it as I flew into the city but seeing it in person was even better. I sat on the riverfront for a good while just taking in the sites and sounds of the city. Then, my stomach started to growl. It was time for pizza!

Guys! Guys! GUYS! My deep-dish pizza wishes were fulfiled when I caught up with my co-workers and we went to Lou Malnati’s Pizzeria! Just like most regions with a regional food specialty, everyone argues about their faves. In Nashville, we can fight about our Hot Chicken offerings, in Chicago the debate continues as to who makes the BEST deep dish pizza.

Well, Lou Malnati’s gets my vote! I’m not new to deep dish pizza, so I knew what I was looking for. A pie with a thick yet chewy crust, good quality cheese, and a robust tomato sauce. Each pie at Lou Malnati’s is mad as you order – so it takes about 35 minutes to get your food. But, Lou Malnati’s boasts great salads, wings, and appetizers so you don’t end up being super hungry. Plus, our waiter was really fun.

I ordered the deep dish pizza with spinach and chicken sausage. I was in food heaven. The pizza was delightfully crispy and flavor filled. But, bust how, the next morning, the pizza tasted EVEN BETTER and it was cold! I wished I could have bought the rest of the food home to Nashville. It was just so good!

So, if you want to take a quick trip, I’d suggest Chicago. I tried to get to other attractions in the city like Navy Pier and the Magnificent Mile but work called and I had to spend the rest of my time in a chilly conference room. You already know, there will be an update to my Chicago adventures. 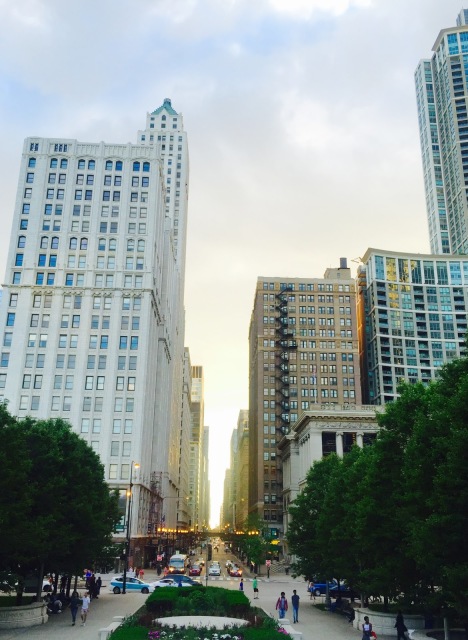 So, have you visited Chicago? What’s your favorite spots?
Let me know in the comments section!